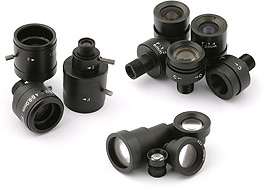 Lenses with a M12x0.5mm thread are officially called S-Mount lenses, though “M12 lenses”, “M12x0.5 lenses” or simply “board lenses” is more commonly used, as they are often used with board cameras. They are the most common “mini lenses”.

The most simple versions can be seen in webcams. Though we provide these simple lenses too (and call them “economical”), we decided to go for the high quality, often megapixel suitable kind of these lenses. Some lenses of the newest generation are even suitable for 5 Megapixel cameras.

While most of the lenses found on the internet read to have a F-Stop of 2.0, few really have. Really light sensitive lenses in this size are hard to find, but we’re proud to offer a whole range of even F1.2 lenses. Other unusual lenses you find here include board lenses with manual Iris (usually board lenses simply have fix iris) and even vario boardlenses are available. In case you need other threads, we can offer M17,M14,M13, M10, M8, M9, M7 lenses too. 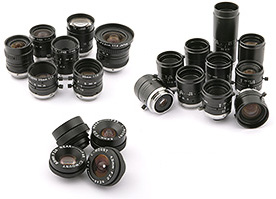 These days this is still the most common type in industrial image processing, esp. in factory automization. Mostly they are used with digital cameras like USB, Fire_Wire, Gig-E and Smart Cameras. All C-Mount lenses have two things in common:

a back flange length of about 17.5mm

back flange length of about 12.5mm

Not sure which is which ?
C-Mount CS-Mount lenses on first glance look very similar .. even the thread fits well. Because only the back focal length is different things can be tricky. Please check the FAQ “How to distinguish C- and CS-Mount with a quick test?” if you’re not sure to have the right lens.

Macro-Lenses are usually c-mount lenses. While “normal” C-Mount and CS-Mount lenses are used at distances of 50cm, 1m or even hundreds or thousands of meters, Macro-lenses are typically used at very short distances, this even could be a few millimeters .. they may of may not be used on larger distances.

There’s no fixed limit for the distances that distinguishes Macro lenses from “normal” lenses. Macro lenses however work better on short distances than on far distances! .. simply because they were designed for this purpose. 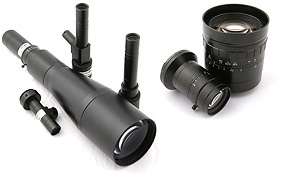 In general, telecentric lenses are C-Mount lenses. Just a few have different Mounts. They are mainly used in Industry, esp. automotive Industry.

The other lens types behave pretty much like the human eye – things that come nearer appear to grow. Telecentric lenses however keep the size of objects!

This makes them perfectly suited for measurement: you can determine the object’s size even when you don’t know it’s distance.